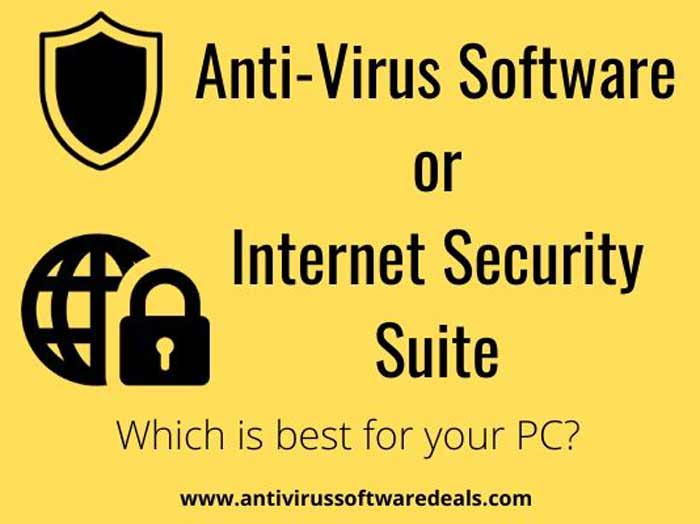 Antivirus software and internet security software are useful in protecting a computer or programmable devices, such as PDA’s and smartphones, from viruses, trojans, spyware, worms, bots, and malware. It is equally important to know the difference between Antivirus Software or Internet Security suite, However, both provides different kinds of protection to our computer.

Until a couple of years ago people only had to worry about viruses – programs created with the sole purpose of doing mischief by either damaging or deleting the data on your computer. These are still around and getting more sophisticated by the day, which is why anti-virus software is so important. To be able to address the needs of the users, antivirus software developed three different types of detection methods: signature-based detection, malicious activity detection and heuristic-based detection.

This is the most common method Antivirus software uses. When your antivirus software uses this type of detection, it compares the contents of a file to a dictionary of virus signatures. A virus signature is a viral code. If a virus signature is found in a file the antivirus software can resort to some combination of quarantine, repair or deletion. If a file repair operation fails, usually the best thing to do is to just delete the file. Deleting the file is necessary if the entire file is infected. The downside of the signature-based detection is those new viruses are being created every day, because of this, the antivirus needs to be updated every time to protect your computer from the new virus.

antivirus software monitors the system for suspicious program behaviour and does not rely on virus signatures as the first line of defence. If suspicious behaviour is detected, the suspect program may be further investigated, using signature-based detection. The suspicious behaviour approach provides protection against zero-day viruses that are not yet in the dictionary. However, it can also sound a large number of false positives and users may become desensitized to the warnings.

The last type of virus detection is heuristic-based detection. This can be accomplished in one of two ways: file analysis and file emulation. File analysis is the process by which antivirus software will analyze the instructions of a program. Based on the instructions, the software can determine whether or not the program is malicious. The second heuristic approach is file emulation, which runs the target file in a virtual system environment, separate from the real system environment.

When a computer connects to a network and begins communicating with others, it is taking a risk. Internet security involves the protection of a computer’s internet account and files from the intrusion of an unknown user. In 2002, more than 10 million people were victims of identity theft, costing the average victim more than $1,000 and a year’s time to repair their credit. Over 90% of computer users have dangerous “spyware” lurking on their computers without their knowledge. Today, a typical online PC is “scanned” by outside intruders twelve times every day.

Different spyware and malware can infect you while using the internet. Internet security software protects you from the web sites you browse on the Internet, adware and pop-ups that load onto your computer, and the range of security features to safeguard the results of your Internet searches, unusual eCommerce sites you visit, the software you download onto your computer from the Internet, and the weaknesses in the operating system software you are using.

Also Read, How to Select The Best Anti-Virus Software?