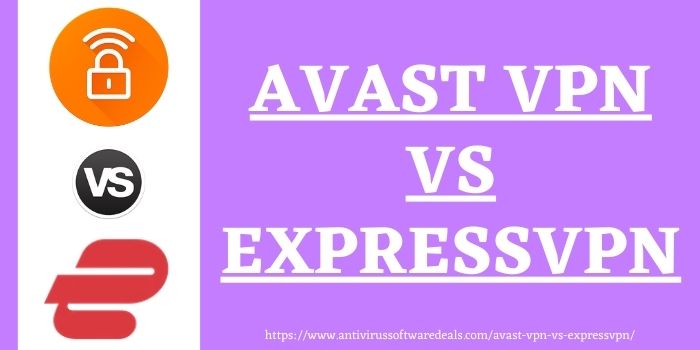 ExpressVPN is one of the leading VPN service providers and is knowing for providing some advanced security features. Whereas Avast Secureline VPN is not that much popular. Today we are going to put these two VPN brands together to do a detailed Avast VPN vs ExpressVPN comparison. We will compare these two brands, on the basis of various factors including speed, security, and streaming.

However, before diving into this deep comparison, let’s have an overview of these two brands.

ExpressVPN is a British Virgin Islands-based VPN service provider and is operating in this field for over a decade. It is considered one of the best VPN and is popular for its streaming and security-related features.

On the flip side, Avast Seculine is one of the products of Avast and is available both as a standalone product and as a part of its antivirus. It is not much popular, however, is considered one of the safest VPNs.

Now, it’s time to find the difference between these two VPNs. For this, we have compared Avast Secureline VPN vs ExpressVPN on the basis of some essential VPN features:

Speed is one of the most important factors while choosing a VPN. For checking the speed of these VPNs we personally checked the US and UK-based servers of these VPNs on a 100Mbps connection.

To our surprise, both VPNs performed well, though ExpressVPN performed a bit better than the Avast VPN test.

On the US-based servers, ExpressVPN delivered a speed of 98.8 Mbps whereas with Avast VPN it was 80.1 Mbps. Whereas on UK-based servers the speeds were 80.7 Mbps and 63.2 Mbps respectively.

So, if speed is your concern, then you can freely go with Avast VPN vs ExpressVPN without any worry. You can better know about the speed of ExpressVPN through its CyberGhost vs ExpressVPN comparison with one of the fastest VPNs in the industry.

When it comes to security, both Avast VPN vs ExpressVPN is considered safe. Both of these VPNs allow their users to browse the web anonymously.

For masking the IP of a user, Avast Secureline uses OpenVPN and OpenSSL protocols along with the AES-256-bit encryption for securing data. ExpressVPN also uses the same kind of encryption, though the major protocols used by it are OpenVPN, IKEv2, and L2TP. Besides, it also uses self-developed next-gen protocol Lightway.

Both of them also come with a Kill Switch. This Switch could prevent your IP from getting exposed if the connection to the VPN drops.

Avast Secureline VPN promises not to log any of the user data and the major information collected by it are:

All this information stays with Avast just for 30 days.

ExpressVPN also promises users not to keep any log of user activities and keeps some basic information for increasing the user experience. That is:

Both ExpressVPN vs Avast VPN promises not to compromise a user’s privacy. However, in recent times Avast was found to be selling its users’ data to third parties. So, if privacy is your concern then it is suggested to choose ExpressVPN rather than going with Avast.

Streaming is one of the most important factors to consider while choosing a VPN is now most of the users purchase a VPN for streaming purposes.

If you too are looking for a VPN for streaming then we strongly recommended you to choose ExpressVPN. It is considered one of the best VPN for streaming and easily bypasses many geo-restricted websites. The major websites that you can unblock with it are Netflix, Prime Video, YouTube, Facebook, Hulu, Spotify, etc. With it, you can also unblock many regional games too.

On the flip side, Avast only works with a few streaming sites. And the most disgusting this is that it couldn’t even unblock Netflix.

It is one of the important aspects that one should look for while purchasing a VPN. If you want diversity, then you should opt definitely opt for ExpressVPN. It has over 3000+ servers in 94 countries around the globe. It also allows you to enjoy up to 160 virtual locations worldwide.

On the flip side, Avast Secureline VPN has a comparatively very low server range of 700 servers only. And these servers are situated in only 34 countries. You can check the Avast VPN Server Address or Avast VPN location of servers here.

Avast Secureline VPN provides 10 simultaneous connections and is compatible with all the major operating systems including Windows, Android, Mac, and iOS. Additionally, you can use it on Android Smart TVs. If you have the latest version of this VPN then it could also work as a browser extension. However, using it can be discouraging for gamers as it cannot be used on Gaming Consoles.

ExpressVPN also supports all the platforms stated above. Besides, you can run it on Linux devices. The other devices on which ExpressVPN can be used are:

However, ExpressVPN provides only 5 simultaneous connections which are half of the connections provided by Avast Secureline VPN.

P2P or Peer to Peer sharing is a way that lets users directly share files between two devices. It is very useful as it lets you share files but there are also some threats related to it.

Both Avast Secureline VPN and ExpressVPN support P2P sharing and secures you by hiding your IP. However, ExpressVPN is more flexible as all of its support torrenting. Whereas there are only 6 servers for Avast VPN P2P sharing.

Avast comes with a plethora of tutorials and FAQs that you can use for solving most queries. Besides, you can get assistance through emails and ticket support.

If you ever feel stuck with ExpressVPN then one of the easiest ways to seek assistance is through its 24/7 available live chat. It also provides some tutorials that you can use for solving minor issues.

Both Avast and ExpressVPN don’t provide any dedicated free version. However, Avast VPN provides a trial version through which you can use Avast Secureline VPN for 7 days for free. But with ExpressVPN, you aren’t even provided with any kind of trial version.

So, we have compared both of this VPN on the basis of features that a good VPN should have. But before making any verdict, it is important to have a look at the prices of these two VPN brands.

The pricing structure of both ExpressVPN and Avast Secureline VPN is different. ExpressVPN focuses on providing short-termed plans whereas the plans provided by Avast VPN are of longer durations.

Besides, ExpressVPN is also expensive than the Avast Secureline VPN and their price is:

So, these are the pricing of these two VPN and you can that Avast is one of the cheap VPN providers. All these plans are backed with a 30-day money-back guarantee. You can also purchase Avast Antivirus and VPN together for making some savings on it. There is a Ben Shapiro ExpressVPN voucher that will help you to save some money. If you are going Avast, then you might also use Avast VPN discount code.

Here we compared Avast VPN vs ExpressVPN, now it’s time to know is Avast Secureline VPN worth it or you should opt for ExpressVPN.

Well, if you want a VPN only for security purposes then you can go with any of them. However, choosing Avast will help you to save some money.

But if you want a VPN for entertainment purposes then it is suggested to opt for ExpressVPN. It comes with some amazing streaming features and also has servers optimized for the same.

Avast Secureline is a nice VPN and is good for providing protection. You can try this VPN if you want to enjoy strong security and privacy features.

Is ExpressVPN legal in Singapore?

Yes, it is completely legal to use ExpressVPN in Singapore. Although, using it for illegal activities is still prohibited.

Can I watch Netflix with ExpressVPN?

ExpressVPN is considered one of the best VPN for Netflix. It also has some servers optimized for Netflix.

Is VPN free with Avast?

Avast VPN is available both with Avast antivirus and as a standalone product. However, none of them is free and for purchasing them, you will have to spend some money.