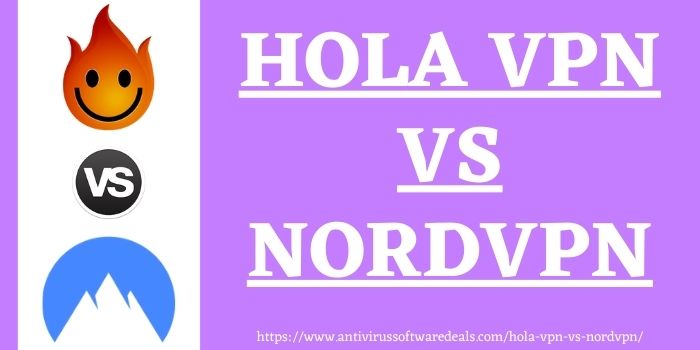 In a decade, the VPN industry has grown a lot and now you may find hundreds of VPN brands out there in the market. Out of these available options, two popular brands are NordVPN and Hola VPN. Today we are going to compare Hola VPN vs NordVPN to find is NordVPN the best VPN or is Hola VPN better than NordVPN.

Which Is Better Hola or NordVPN?

We have personally used both of these VPNs and have tested them on several factors. If you don’t want to compromise with your security or want great streaming speed then you should opt for NordVPN.

But in case, if you are looking to secure more devices or want to use a VPN for free then you should use the Hola VPN.

For knowing more about these two VPN brands, you can have a look at our detailed comparison between Hola VPN and NordVPN.

Overview to NordVPN vs Hola VPN

Introduction to Hola VPN vs NordVPN

NordVPN is a Panama-based VPN brand and is offering its services since 2012. It is known for offering high-quality VPN services that can be enjoyed on various devices.

On the flip side, Hola VPN is based in Israel and was also established in 2012. It doesn’t work like ordinary VPNs instead, it uses a P2P network for serving its users.

To find the difference between Hola VPN and NordVPN, we will compare these two VPNs on various aspects:

NordVPN vs Hola VPN: Masking or Hiding of IP Address

NordVPN is one of the leading VPN brands and is capable of safely masking your IP address and keeping it private. It uses various protocols like OpenVPN, IKEv2/IPsec, and NordLynx for providing anonymity to a user.

On the flip side, Hola VPN completely works in a different way. It uses a peer-to-peer network that lets users use each other’s IPs for accessing the internet. This means, with Hola you access the internet with someone else’s IP address, and other users use your IP for browsing the web. So, this shows that with Hola, your real IP doesn’t remain safe or private.

So, it is better to choose NordVPN in place of Hola VPN, if you don’t want to compromise your IP address.

As mentioned, Hola VPN also promises to provide best-class encryption to its users. However, it hasn’t yet disclosed how it protects user’s data or what kind of encryption is being used by it. This might create a doubt in your mind that whether your data is safe with Hola VPN or not.

In the previous years, many VPN brands were found to be tracking the activities of their users and selling them to third parties. Though this mainly happened with free VPN providers.

If you are using or planning to use the services of NordVPN then you don’t have to worry about your data. NordVPN follows a strict no-log policy and also doesn’t comes under the jurisdiction of any major country. This makes NordVPN one of the best choices for privacy lovers.

Like NordVPN, Hola VPN also follows a strict no-log policy and promises not to track a user’s activities. The only thing that doesn’t support this VPN is that it is headquartered in Israel, which is found to be collaborating with the 5 eyes alliance.

Like other VPN brands, NordVPN also offers server-based IP addresses to its users. It has around 5500 servers placed in around 59 countries around the globe. This means that by using NordVPN, you can get access to the regional content of around 59 countries.

It is one of the foremost reasons for which most users use a VPN. Hola VPN and Netflix both are capable of unblocking lots of libraries of Netflix along with UK and US libraries. It also supports 4K video streaming. However, while using this VPN, you will face some issues like it will log you out every time you change your IP or Netflix frequently blocks you as it easily determines that you are using a VPN. 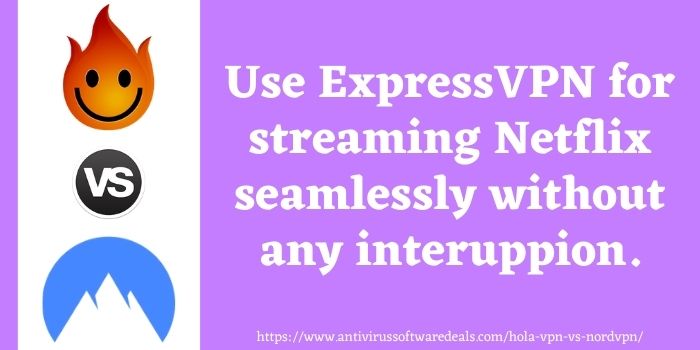 So, it is recommended to use one of the best VPN for Netflix, NordVPN. With this VPN who can unblock various regional Netflix libraries including the libraries of the US, UK, Denmark, Canada, Japan, Australia, etc. Additionally, it comes offers some NordVPN Netflix servers especially optimized for streaming.

Both NordVPN vs Hola VPN is compatible with a wide range of devices and operating systems. NordVPN can work on various devices including Android, Windows, iPhone, Mac, Linux, and Chromebooks along with various gaming consoles, smart TVs, and routers. Besides, you can also use the NordVPN extension for NordVPN Chrome and Firefox.

Hola VPN also works with a variety of devices and can be used as a:

So, these are the devices and operating systems on which both of these VPNs can be used. So, you can choose any VPN between Hola VPN vs NordVPN according to the device on which you want to use it.

Since Hola VPN is based on a Peer-to-Peer network, still it doesn’t support torrenting. It restricts P2P sharing and blocks all the data shared between two peers. You can also read about the best torrent sites for audiobooks, for the most reliable online reading sources.

So, if you want to enjoy torrenting then you should consider using NordVPN. It supports peer-to-peer sharing of data and even has some servers optimized for the same.

Thus, for enjoying torrenting, you should definitely go with NordVPN between NordVPN vs Hola VPN.

So, far we have discussed the major features of NordVPN vs Hola VPN. Now, it’s time to have a look at the price of these two VPNs.

NordVPN provides three kinds of plans that are:

All these plans provide 6 simultaneous connections and are backed with a 30-day money-back guarantee.

Hola VPN also offers some subscription plans to its users and these are as follows:

So, these are the various plans of Hola VPN vs NordVPN and the price of both of these VPNs is almost the same. Though if you want to secure more devices then choosing Hola VPN is a great choice whereas, for less number of devices, you should choose NordVPN. 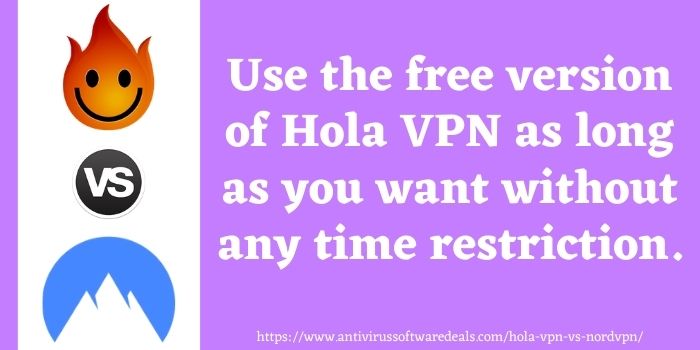 Now it’s time to check whether these VPN providers offer any free version or not.

Hola VPN comes with a free version named Hola Free Forever. You can simply do the Hola VPN download of this version from the official website of Hola VPN. There isn’t any Hola VPN time limit for using this version and you can use it as long as you want. Though this version comes with some limited features and also lacks some security attributes.

So, here we have compared these two VPNs here and would like to again suggest you choose NordVPN for streaming and security. And to secure larger devices, you should choose Hola VPN.

Q. Is Hola VPN safe to use?

One of the major problems with Hola VPN is that it doesn’t keep your IP address private. So, if you don’t mind compromising your IP then you can use it without any worry.

Q. Is NordVPN worth the money?

Yes, NordVPN provides worth for your money. It provides strong security and privacy features. It is also priced fairly as compared to its rival.

The bandwidth provided by the Hola VPN is unlimited and it doesn’t monitor the traffic of its users.

Q. Is NordVPN legal in Australia?

The use of NordVPN is completely legal in Australia. You can use it without any worry.