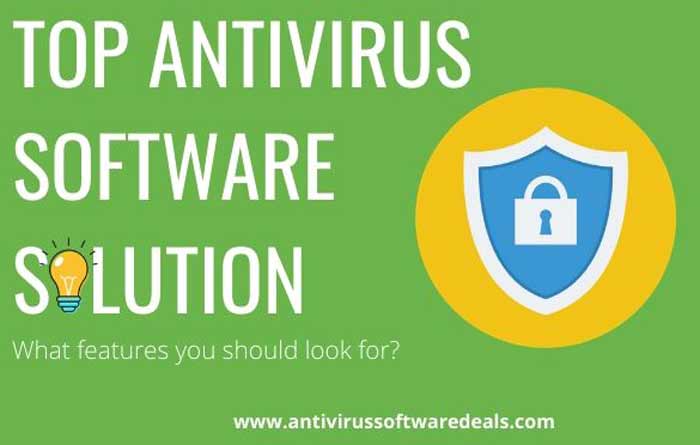 Most people don’t recognize that viruses and other forms of malware are lurking all around the internet, just waiting for a chance to infect our unprotected computers. Usually, You won’t even know you’ve become a victim until your computer slows down to a crawl or you are missing important files. So What to look for in a top antivirus software solution?

The internet makes it possible for malware to spread around in a matter of minutes. Users must keep in mind that computers are private pieces of equipment, and for this reason, users must lock their computers similar to the way they lock their cars and homes. Your best way to grant your computer this kind of protection is through antivirus software and internet security software.

Antivirus software is a set of computer programs that attempt to identify, neutralize or eliminate malicious software looking to do your computer harm. The best antivirus programs will stop viruses before they ever reach your hard drive and keep your computer safe, usually without you even noticing. Finding the antivirus program that best fits your computing needs must be the priority of every computer user when securing their machines. Listed below are some of the criteria that you may want to consider in choosing the top antivirus software.

For users with a limited budget, price is the first consideration in choosing a top antivirus solution. Unlike other forms of software, antivirus software must be continually updated to remain effective. Additionally, new versions should be purchased annually to maintain the highest level of protection. Vendor prices for upgrades and annual licenses vary widely. One of the best-valued antivirus software available in the market is Bitdefender which will only cost you $24.99 and covers three household computers.

Malware protection is the soul of an antivirus solution. For this reason, several independent testing labs are conducting unique and relevant batteries of tests to gauge the performance of different antivirus software packages available in the market. Most antivirus packages will pass these tests, however, you don’t want mediocre protection for your computers. You want the best, top antivirus protection. The top antivirus solutions, as proven by the consistent results from the different testing labs are ESET NOD32. NOD is the CNET Editor’s Choice for 2009. This Antivirus software is one of the three software solutions to achieve the Advance+ rating from AV-Comparatives. NOD also receives the VB100 award consistently.

Top antivirus software needs to be updated as often as possible. This will give you the slimmest duration of vulnerability to new malware. The antivirus that will give you the best update frequency is Norton Antivirus. With its new Pulse Updates, The new Pulse update keep updating your Antivirus software in every 5-15 minutes! To give you an idea of just how great that frequency is; some antivirus packages only provide DAILY virus definition updates.

It is always enticing to buy antivirus that offers additional features. The new version of Vipre offers other tools such as a history cleaner, a PC Explorer, and a secure file eraser.

All these major factors help us to know What to Look For in a Top AntiVirus Software Solution that provides us with a secure environment to use the PC. Also, read our detailed reviews on Top Antivirus solutions on the market today. If you want to see them compared side-by-side to check out our detailed Antivirus Comparison grid.