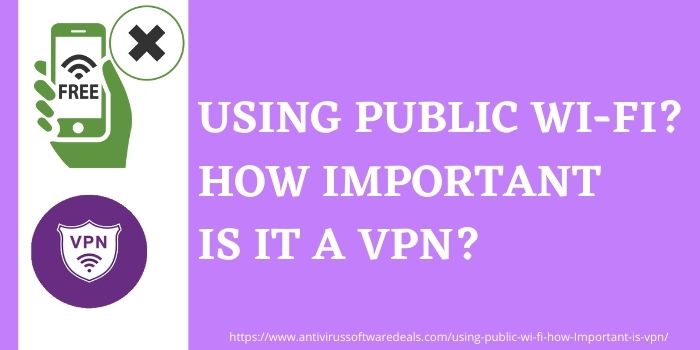 Using Public Wi-Fi? How Important Is VPN? Be it grocery shopping, doing your pending work at a coffee shop, public Wi-Fi is a facility that saves your day. But what about the vulnerability that comes with it?

Public Wi-Fi is installed in railway stations, airports, coffee shops, supermarkets, and such places where a large number of people don’t have to miss out on their important work updates and other commitments. But, such networks are often left unsecured, without any password protection.

One popular Cybersecurity brand recently published data in its Insights Report. It says 6 out of 10 consumers consider using public Wi-Fi riskier than using a public restroom. So, we know about the dangers now. What are we doing about it?

We can use a VPN service to minimize the risk. How? Let’s have a look.

What is a VPN?

VPN or Virtual Private Network connects a user’s device to a private network over any public network to offer more security. Additionally, it masks the user’s the IP address or Internet Protocol address therefore, all online activities on that device become virtually untraceable. VPN encrypts all exchanged data and guarantees greater privacy than even a secured Wi-Fi hotspot.

Now, the most important part of our article – Public Wi-Fi is everywhere, so to make it more accessible the services are barely sophisticated concerning security enhancements. Most often such networks are password-free, unencrypted. Below are the risks that involve.

Hackers find public hotspots as their primary targets because they are easy to get access to. After infiltrating, they steal the personal details, login credentials of users. Hacking these days is not difficult. There are tools like Packet Analysers which makes the job very easy.

Hackers can put malware into a user’s device giving hackers access to everything on the device including files, photos, camera, voice data, biometrics. Malware is very dangerous as it becomes very hard to get rid of it.

Sometimes hotspots that show up during scanning for public networks, are originally fake networks set up by cybercriminals. Sometimes they emulate the name of the legitimate network to trick users. This way, user’s devices get directly connected to the rogue connection and end up losing a fortune.

What information is vulnerable?

After knowing how you can get entrapped, you should know what exactly can be stolen and put at risk.

What are some alarming facts?

Identity Theft Resource Centre conducted a study that showed, around 40% of people are not worried about using Public Wi-Fi. Among the worried section, less than half adopted measures to secure their connection on these networks. The more unsettling fact is that many people despite knowing the risks involved, choose to opt for such networks.

McAfee, a renowned antivirus brand, observed a poll that revealed 38% of people still choose to use free unprotected Wi-Fi.

AARP’s Convenience Versus Security Report divulges that a quarter of the Internet using adults use public Wi-Fi once or more than once a week.

It is pretty clear now how vulnerable we are in the face of such risk.

How Important Is VPN?

Here is a flow chart that can demonstrate the process.

Without VPN the process is,

The normal way where VPN is not used involves zero protection for your vulnerable devices (evident in the first diagram). Whereas, using a VPN makes your device connect to the VPN client, making your data encrypted and masked when it reaches the Internet Service Provider of that Public Wi-Fi. Next, before the internet connection, the VPN server prevents your IP from getting exposed to multiple trackers online.

We hope this article has been informative for our readers. From now on,they would exercise caution before throwing their devices into the clutches of Public Wi-Fi networks.

Remember, we are not discouraging you from using public networks. We are advising you to comprehend the risk factors, given how prevalent the threats are, and suggesting a VPN service.

There are leading brands in the market, where basic to premium VPN services are being offered. You can easily enroll for one such service, based on your budget portfolio and stay safe on the go.

Our Other Related Articles: