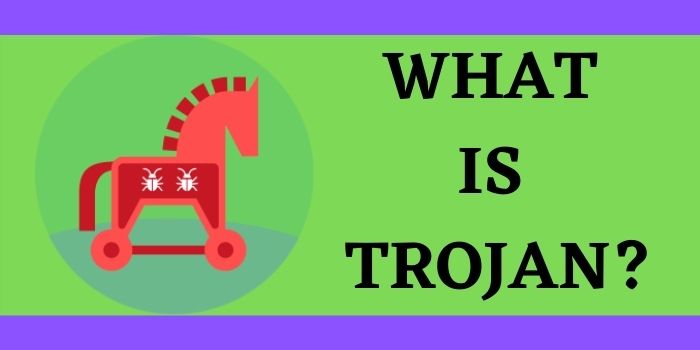 A Trojan is an autonomous program that appears to be performing usual computer functions but the fact is, it is performing underground malicious functions that will, in the end, allow unauthorized access to your computer. It does not replicate itself as a worm would do, nor infect other files like what a virus would do. Here we tried to understand What is Trojan? Now Let’s get to know more about the type of infection and how to solve if your PC is infected with the Trojan?

Similar to what we know about the mythical Trojan Horse of Troy, a computer Trojan appears to be a gift, a fully functional software or an email attachment but turns out to be a harmful program that can cause a lot of damage to your computer. The most common means of Trojan infection is through email attachments. The malware developers usually use spam emails to distribute their Trojan to a lot of computers.

Another method by which Trojans can be transmitted is through chat software like Yahoo! and Skype. Trojans can also be included in the different software that you download on the net. Landing on your inbox or your chat software is not enough to launch the Trojan. Trojans are executable programs which mean that you need to open the file before it can perform its actions. We must keep in mind that in Windows, executable programs have file extensions like exe, VBS, com, bat, etc.

Getting rid of your Trojans

Because Trojans come in different types, there is no single, ideal way to get rid of them; instead, there are many different ways to delete them. The most basic step involves clearing the temporary internet files folder and deleting it manually. Secondly, antivirus software is capable of detecting and removing different Trojans automatically. But if the antivirus cannot locate the Trojan, you can boot the computer from an alternate media like a live CD, which may allow your antivirus to find the Trojan and get rid of it. You must also make sure that you have the latest updates on your antivirus or else they might miss the Trojans.

Your last choice and the most gruesome of all is a clean re-installation process. You must back up your entire hard disk and then reformat the disk. Re-install the operating system and all your applications from original CDs to avoid unwanted infiltration, and finally, if you’re sure that your files are not infested, restore your user files from the backup.

Never open an e-mail attachment from a stranger. You should also never open an e-mail attachment from someone you know unless you know exactly what the attachment is. As mentioned above, always keep your antivirus software up-to-date. Next, beware of hidden file extensions! By default, Windows hides the last extension of a file, so it is very difficult to spot Trojans To solve this problem, go to Folder Options, select the View tab, and then check show hidden files and folders and uncheck hide file extensions for known file types. Follow these tips and your computer will be safer from Trojan infestation.